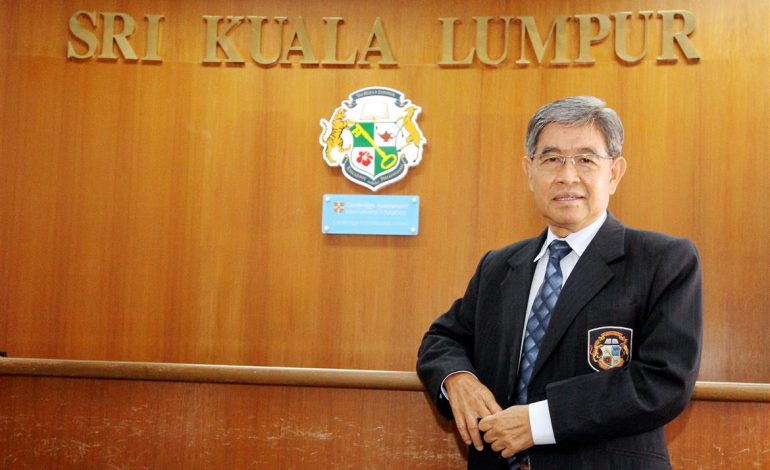 Today, Chew Teck Ann is the principal of Sri KL International School. He describes it as a 24/7 job.

Terengganu native Chew Teck Aun has worn two hats during his 46 years in the teaching profession.

He was a teacher of Maths and Chemistry before his promotion to senior assistant, a post he held for 12 years. Later he rose to the rank of principal, while continuing to teach Add Maths, at SMK Kepong Baru in Kuala Lumpur for nine years before his retirement from public service.

He was awarded the title of Super Principal by the Education Ministry in 1996, for significantly improving student achievement at SMK Kepong Baru. And in 2003, he was awarded Tokoh Guru Wilayah.

Whilst being a teacher is “a respectable job”, he said, being a principal can be “extremely rewarding”.

“I enjoyed every moment of being a teacher. Besides Maths and Chemistry, I also taught my students compassion, morals and (how to make) wise choices,” said the sixty-something.

Presently, he is the principal of Sri KL International School, in Subang Jaya, Selangor, where he has worked for about 17 years.

Chew attended primary school in Kemaman, Terengganu. He completed his secondary schooling in Victoria Institution in Kuala Lumpur. While pursuing further education in Universiti Malaya, he majored in Chemistry and Mathematics. He later obtained a Diploma of Education at the same university.

Although Chew’s career has been in education, he had wanted to be an engineer because of his love for Science and Maths. But destiny took him on a different path. “I was offered a scholarship to pursue teaching,” he reminisced.

“In the old days, teaching was often viewed as the most important profession. I took the scholarship, became a teacher, and never looked back,” he said. On reflection, he said that if he had not become a teacher, he might have ventured into business. 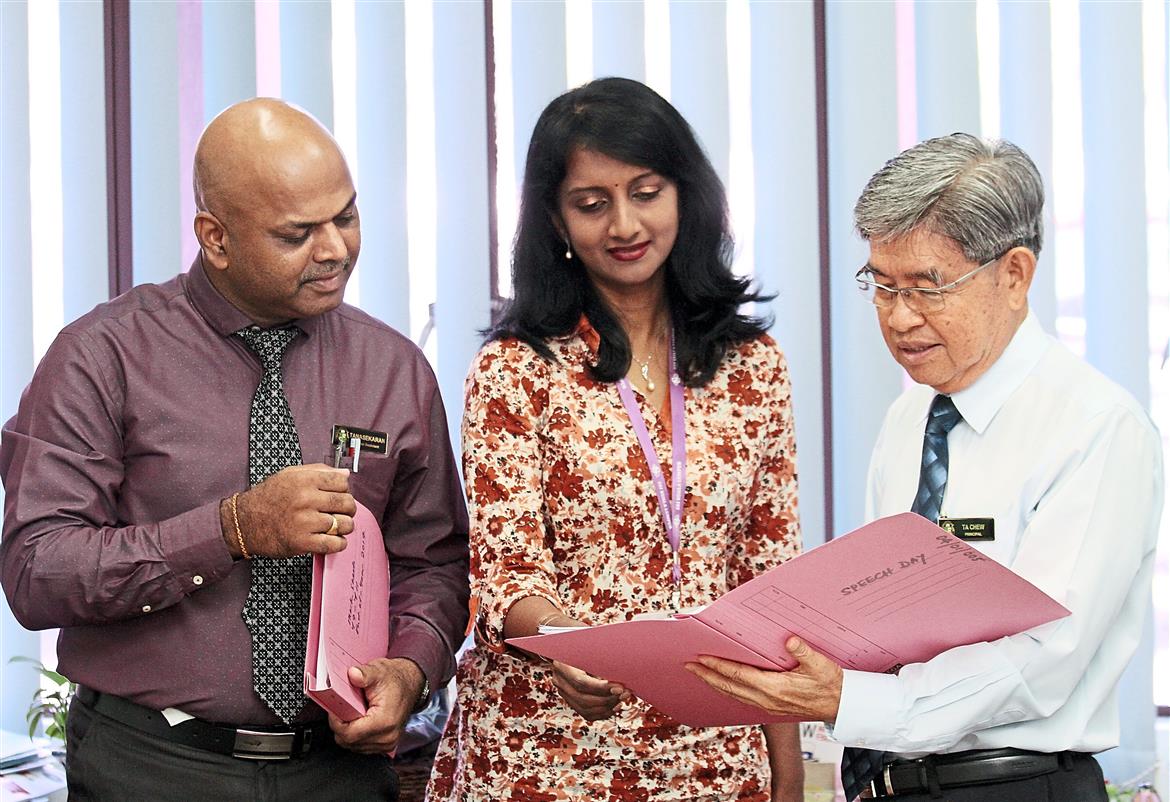 The work is never done

His workday begins at 5.15am when he starts getting ready for school. His day officially ends at 4.45pm. On weekends, he enjoys playing golf with his friends.

Chew feels he can use his authoritative role to inspire and make a difference in students’ lives. He believes in building positive relationships with students and their parents.

Teaching is hard work but also most satisfying, for him. He likes to see his students reach their full potential. There is nothing more rewarding than seeing his students become successful, he said.

He is also contented when seeing problematic students start to improve their behaviour and get better grades. A principal’s job, he said, is “unpredictable, intellectually challenging, physically demanding and never done”.

“It’s a 24/7 job. Just when you think you’ve hired the last teacher, conducted the last meeting, disciplined a few naughty kids, dealt with that last phone call from a parent, someone or something else will always demand your attention,” he said.

No two days are alike. Even in school, he’s in a busy and fast-paced environment. “I must be sensitive to a variety of immediate and long-term demands and assist others in decision-making. I do what is best for my students and the school community,” he said. 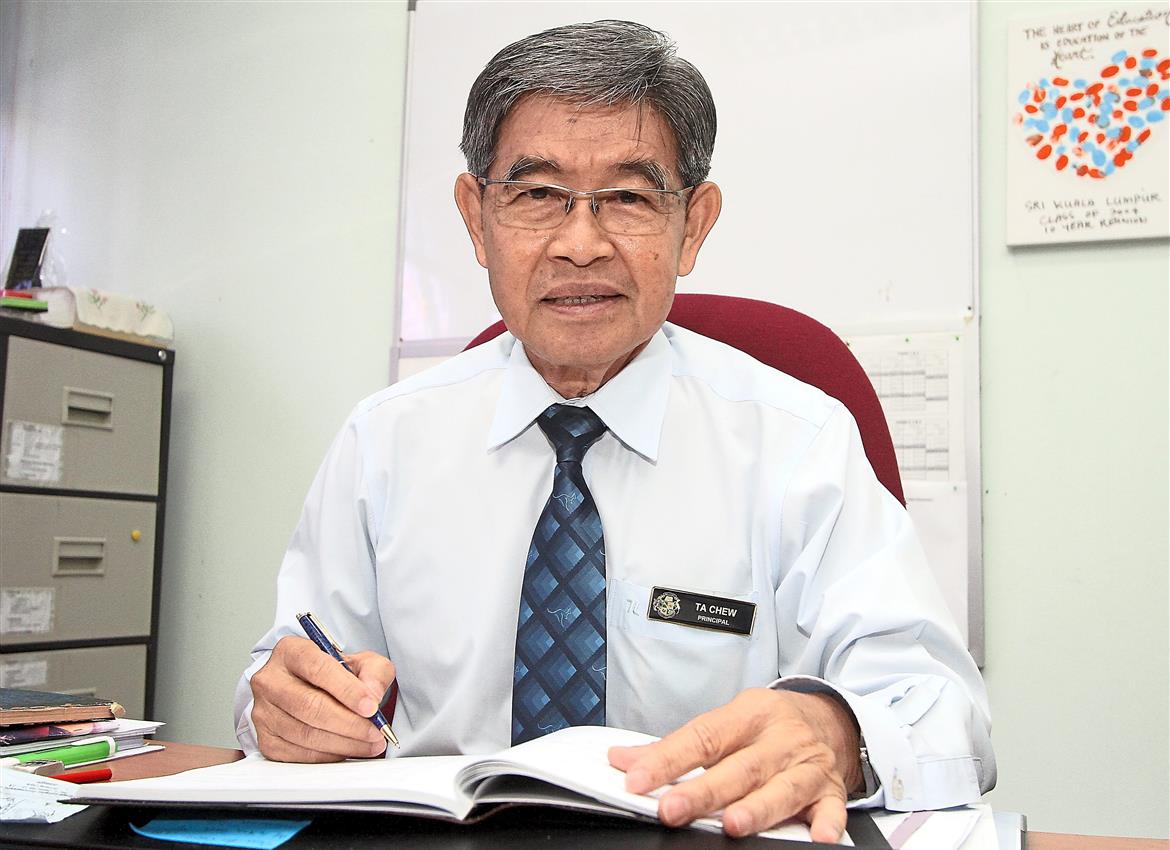 Chew Teck Aun had wanted to be an engineer because of his love for Maths and Science. But life took him on a different path when he accepted a scholarship to pursue teaching. He has not looked back since.

Education, he said, is more than just grades. Character-building has become an increasingly important issue. Children are under pressure to achieve, to be competitive, said Chew.

“When a child doesn’t perform, we have to look at issues such as discipline, values, and the support and availability of the parents. There are many factors that affect a student’s performance. We need to find out the reasons a student isn’t performing well.

“Parents putting pressure on children will never solve the problem. A child will feel less inspired and more threatened if they feel pressured.” Chew said it is normal for parents to have high expectations of their children but these should not be unrealistic.

Having worked in both government and private schools, he explained the difference: “In a government school, a principal has more responsibilities – from running the school to taking care of finances and dealing with urgent repairs. In a private school, the principal’s only focus is to run the school.”

Chew said his father was “most inspirational” to him.

He said: “He taught me many valuable life lessons. He believed in being firm, and encouraged me to stand up for what I believed in. My father also taught me logical reasoning, kindness, compassion, honesty and discipline applied with understanding.”

Chew is passionate about his work, giving his best shot regardless of age. He reckoned that he should “do the right thing, not the popular thing”.

Retirement, he opined, should not be the goal when one can still contribute positively. He said: “I will know in my heart when it is time to call it quits. Until that day comes, I will focus on what I’m capable of and do my best for the school.”