The right steps in understanding cultures 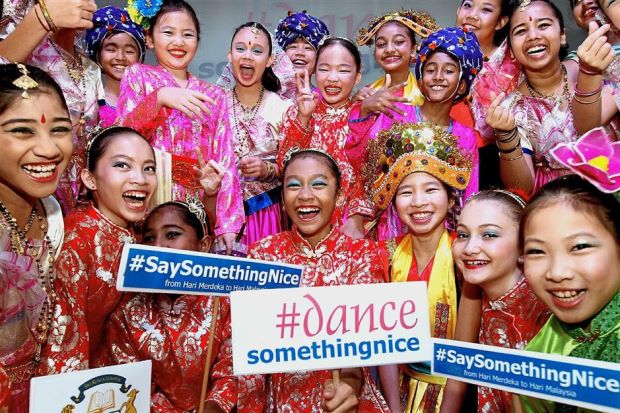 The ASK Dance Company managing director started learning Malay dances when he was 13 but embraced the traditional dances of other cultures, from the Chinese fan dance to the Kadazandusun folk dance, when he studied at Aswara (National Academy of Arts, Culture and Heritage).

For his degree, Imran decided to major in the Bharatanatyam, the classical Indian dance.

“Learning all these traditional dances made me a better Malay­sian,” said Imran, 27, during the #DanceSomethingNice programme at Sri Kuala Lumpur.

#DanceSomethingNice is part of #SaySomethingNice, an annual campaign that seeks to use the 17 days between National Day and Malaysia Day as a time for positivity.

Imran said as dance was a translation of a culture’s story, beliefs, gestures and even food, he gained insight into the different traditions and lifestyles.

“In the Bharatanatyam, we tell folklore and stories of their gods. From there, we understand their beliefs, how they live, why they go to temple every fortnight or eat certain spices,” Imran said.

Learning dances originating from a different culture was not a problem for Imran.

He said there was separation between his faith and appreciating the dance purely as an art form.

“In fact, a lot of the sacred rituals that is part of the Bharatanatyam has been altered, making it not a religious performance but a cultural experience,” he said.

Imran said traditional dancers and performers were an important part of nation-building as they were the keeper and ambassador of a nation’s culture heritage.

Sri Kuala Lumpur student dancer Jayden Roy Joseph said dancing pushed his limits and allowed him to know and be his true self.

“When I dance, I can be myself and not who people want me to be,” the 12-year-old said.