PETRA JAYA: The government will present the same rewards to Malaysian para-athletes as enjoyed by their able-bodied comrades, should they win any international sports competitions.

Youth and Sports Minister Khairy Jamaluddin said the reward system was different three years ago, where the value of rewards received by para-athletes were slightly less than regular athletes. 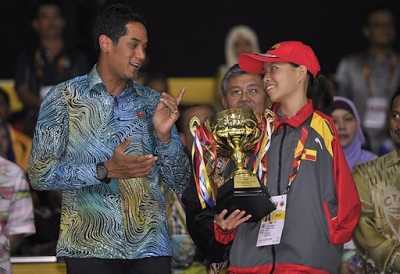 “After I was appointed as a minister, I immediately checked with my officers on the value of the rewards received by the two groups. “I was told that the amount (for para-athletes) was 30 per cent of the amount given to able-bodied sportsmen.

“The ministry immediately changed the system. If you are a national athlete who wins gold in an international tournament, then you deserve to receive the same token of appreciation as an able-bodied sportsman,” said Khairy in his speech during the closing ceremony of the National Paralympic Games 2016 at Sarawak’s Unity Stadium here tonight.

The event, said Khairy, was proof that the government is always looking into ways to create the same opportunities for sportsmen with different abilities.

“And Malaysia can be proud that our country, through various events, provide opportunities for all people, regardless of their abilities, to represent the nation at the highest level. “If the 18th Malaysia Games, which was held recently in Sarawak, had excited our souls, this event (National Paralympic Games) moved our hearts,” he said.

“To all paralympic athletes here, I am aware that you were told that you are different from others. “Let me tell you this. You are not only different but extraordinary. “You put people with normal abilities to shame with your extraordinary skill and will to succeed,” said Khairy.

He also presented the best men and women athletes awards to Yoong Chung Wei from Penang and Carmen Lim from Selangor.