Trio talk their way to the top 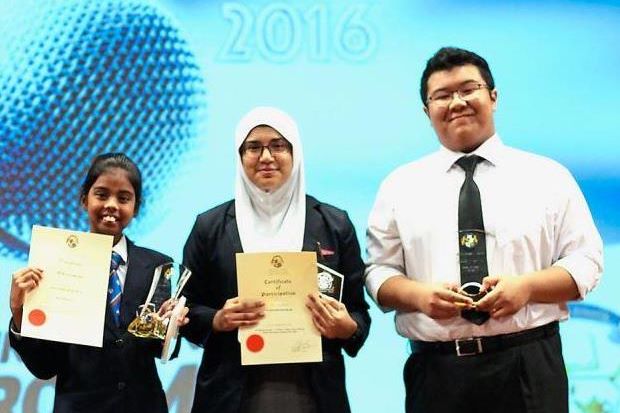 Public Speaking champs: (from left) Anoushka, Tasneem and Mustaqim pose for a grouop photo after the competition

PUBLIC speaking is an excellent platform for young people to voice their opinions and be heard.

In conjunction with this, Sri Kuala Lumpur International School, together with its sponsors Trinity College, University of Melbourne and JM Education Counselling Centre, hosted an annual public-speaking competition to showcase the talents of teenagers from around the Klang Valley.

Fifteen schools took part in this year’s event. The participants ranged in age from 13 to 17 years, and comprised students from both government schools and private international institutions.

On the day itself, eager contestants from far and near could be seen trickling into the Sri KL school grounds as early as 7.30am.

The competition got under way at 9am and took just under two hours to be completed.

Visiting from Melbourne was chief judge Danny Fahey who is the acting associate dean of Trinity College. He shared some points on public speaking with the crowd.

Assisting him in the judging process were Koo Yi Lin, Education Services manager from the Victoria state government and Chacko Vadaketh, a local performing artist.

In the end, it was Tasneem Khokhar of Asia Pacific Smart School, who emerged as the winner. She spoke on the topic “People Often Stereotype”. Tasneem received a challenge trophy, plaque and cash prize.