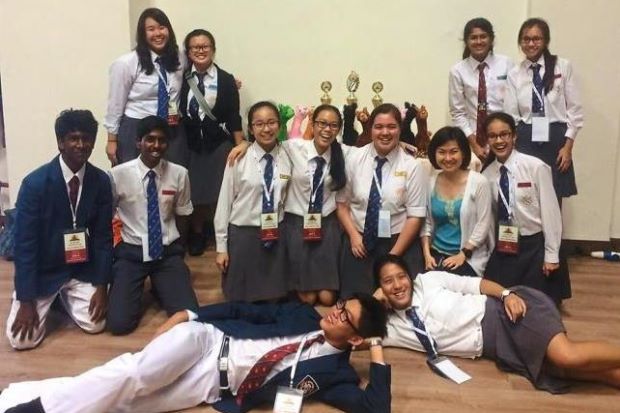 We wanna have fun: Students with their teacher and chaperone Tarynn Tey and the writer Ceri Holloway (middle row, second and third from right respectively).

A student recalls the sheer ecstacy of winning a competition with her schoolmates after frantic days of writing, debating, tests and yes, some partying too!

WHO would have thought an academic event could get so popular? There were teachers organising their troops, old scholars greeting each other and “newbies’ like us who were too busy marvelling at the sheer size of the crowd. The music was booming through the speakers and the opening ceremony hadn’t even started yet. This was the Global Round of the World Scholar’s Cup.

Recently four teams from my school, Sri KL, took part in the KL Regional Round of the World Scholar’s Cup.

It was two days of tests, writing and debating, but it was also two days of Uptown Funk being replayed till we unconsciously sang along as colourful little stuffed toy alpacas were thrown at us. The alpaca is a symbol or might I add, a mascot for the event.

It was no regular weekend – but hey, no one was complaining! On top of that, all four teams from Sri KL had been invited for the Global Round.

Three weeks later, two of our teams which had accepted the invitation were ready for the challenge in the Global Round 2015 held at the KLCC’s Plenary Hall.

Once the pleasantries were over, the competition had a soft opening with the Scavenger Hunt. This was a great ice breaker, an excellent form of physical exercise and yes, some public embarrassment too because we had to perform strange tasks in the full glare of the Suria Mall shopping public.

We had a gathering that night called the “Social Night” – surely an awkward dinner with strangers strategically positioned to enforce new friendships. But this couldn’t have been further from the truth. Throw in loud music and a large dance floor and even a tiring day couldn’t dull the universal excitement. The only thing that stopped us from being on the floor all night was the fact that we had to be awake before sunrise the next morning.

The next day, the serious competition began. Spread over two venues, both the Sri KL teams were sent to Epsom College in Malaysia in Bandar Enstek, Negri Sembilan. We started off with the challenge before being whisked off to debate three rounds, all before lunch.

Collaborative writing was the last event of the day and you could almost hear the sighs of relief ringing through the room. Tiring? Definitely. Boring? Absolutely not.

We were back the next morning at KLCC raring to “bowl”.

It was the last academic event of all, the tension in the auditorium was palpable. But the organisers knew perfectly well how to reduce this tension – by giving out neon-coloured coloured alpacas.

Cheers erupted when it was over because it meant all that was left was fun for the remaining days!

The Talent Show was another highlight of the event – you’d never think that the performers were also scholars taking part in this academically demanding event.

Dancers, singers and musicians made the crowd clap, dance and sing along while standout performances got well-deserved standing ovations.

My teammates and I snuck out just before it ended to beat the human traffic at the doors. We still had several hours before the start of the event that we we were most excited about – the Scholar’s Ball.

If you’ve never been to a dance or prom, this is definitely the place to start. Less like an actual ball, it was more like a nightclub, complete with strobe lights and deafening music but minus the alcohol and age limit.

Also, strategically planned out were the snack bars in the corners of the ballroom that were laden with drinks, food and ice cream. This self-dubbed “Nerd Prom” was like a social night, only it was bigger, better and a lot louder.

With both the Junior and Senior scholars in the room, it was a tight squeeze for the 3,000-odd crowd on the dance floor. But when the beat dropped, no one really cared that they were being pushed in about five different directions at once.

We had the next morning free and got to watch another amazing talent show before the closing ceremony started after dinner. Our delegation from Sri KL was holding our breaths as well at our seats as they called out teams for each award.

The list of schools and individual prize winners got longer and longer; we were a little disappointed to think we hadn’t even done well enough to register an honorary mention.

The top 50 countdown for writing began, and we reached rock bottom with the top 10 but still without our school name ringing out. Third place, second place, and in first … SRI KL!

A little breathless and still in shock from the unexpected victory, we ran to the stage and got our trophy almost in tears.

But the good news didn’t end there. Once the full results were out, we realised that we had qualified for the Tournament of Champions. And where would this be? In none other than Yale University, one of the United States’ oldest and most prestigious varsities.

After this whirlwind week, the best thing about the World Scholar’s Cup was that it proved that academic excellence need not come at the expense of teen spirit and playfulness. Given this opportunity, teenagers from all over the world took part without any inhibitions, often having fun but enjoying every minute of the intense competition.

The World Scholar’s Cup is not just an academic competition. It’s a celebration of learning and an experience of a lifetime.

Yes, we are heading to Yale.